U.S. Latino Population Growth and Dispersion Has Slowed Since Onset of the Great Recession

Between 2007 and 2014, Buffalo, Rochester, Dunkirk and Erie, PA. the latino population grew by 28.67 percent and is expected to grow by over 35 percent by the next scheduled US Census count.

The nation’s Latino population has long been characterized by its rapid growth and by its wide dispersion to parts of the country that traditionally have had few Latinos. But a new Pew Research Center analysis of U.S. Census Bureau data finds that the growth and dispersion of the U.S. Latino population has slowed since 2007, when the Great Recession started, immigration from Latin America cooled and Latino fertility rates declined sharply.

This slowdown has been driven by two, large demographic trends affecting the Hispanic community. Immigration, which in the 1980s and 1990s was the principal driver of Hispanic population growth, began to slow in the mid-2000s. And, in the case of Mexico, immigration has now reversed back toward Mexico since 2009. As a result, the main driver of Hispanic population growth shifted to U.S. births. But here too, change is underway: Throughout much of the early 2000s birth rates of Hispanic women ages 15 to 44 were about 95 births per 1,000 women, reaching a peak of 98.3 in 2006. However, since the onset of the Great Recession, their birth rates have declined, steadily falling to 72.1 births per 1,000 Hispanic women ages 15 to 44 in 2014. 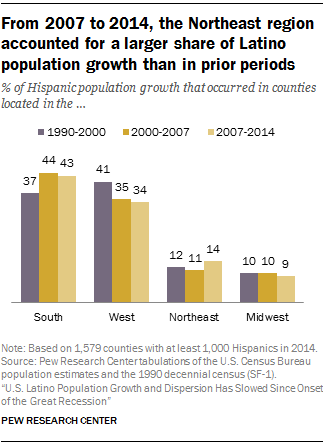 The slowdown in Latino settlement to traditionally non-Latino areas reflects changes in the demographics of Latinos, but also that the counties with few Latinos today are generally smaller counties overall. The 1,562 counties with fewer than 1,000 Hispanics in 2014 are largely located in non-metropolitan areas of the country and have a median population of about 13,000 people. In the coming years, while some Latinos may move there, it is possible that the slowdown in dispersion will continue.

These two trends – rapid population growth and geographic dispersion – have led to a number of Latino-driven demographic changes nationwide since 1990. As of 2012, 17 states had kindergarten student populations that were at least 20% Latino, up from just eight states in 2000. And the growing and dispersing Latino population has led to rising electoral influence of Latino voters in recent elections as the number eligible to vote has grown in many battleground states such as Colorado, Nevada, Virginia and North Carolina, even though Latino voters are largely concentrated in non-battleground states like California and Texas. Yet the slowdown in Latino population growth and dispersion may slow these trends as well in the coming years. 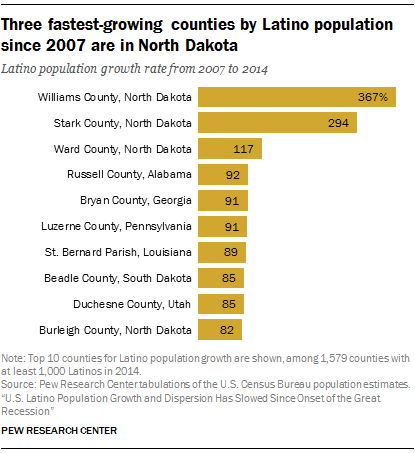 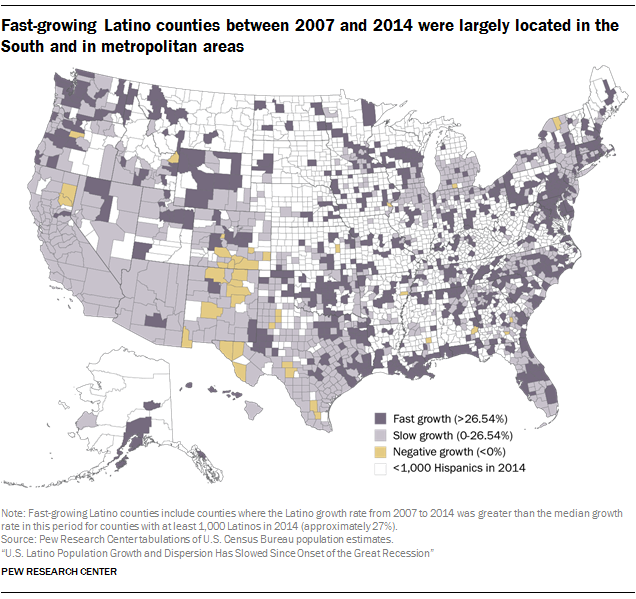 Other key findings from the report include:

Latinos in the counties

Panorama Hispano is the regional news and information newspaper for Hispanic and other diverse communities.
US Hispanics are now the largest ethnic minority in the United States numbering 54.2 million as of July 2014. Serving: Buffalo, Rochester, Fredonia, Niagara Falls, NY and Erie, PA. Outside our Market area: Visit our affiliate at: http://www.impremedia.com/
Contact us: Contact@PanoramaHispanoNews.com