WASHINGTON—Federal Reserve officials signaled Wednesday they could pick up the pace of interest-rate increases this year and next to keep a rapidly expanding economy on an even keel.

Central bank officials voted unanimously to raise their benchmark federal-funds rate by a quarter-percentage point to a range between 1.75% and 2%. It is their second rate rise this year, and they penciled in a total of four increases for 2018, up from a projection of three at their March meeting.

“The decision you see today is another sign that the U.S. economy is in great shape,” said Fed Chairman Jerome Powell at a press conference following the Fed’s two-day policy meeting. “Growth is strong. Labor markets are strong. Inflation is close to target.”

Eight of 15 Fed officials now expect at least four rate increases will be needed this year, up from seven in March and four in December.

Stocks fell as investors calculated higher borrowing costs could weigh on earnings. Major stock indexes were little changed ahead of the decision but later wobbled and closed near session lows. The Dow Jones Industrial Average declined 119.53 points, or 0.5%, to 25201, and U.S. government bond yields climbed after the decision, with the 10-year Treasury rising to 2.979% from 2.959% on Tuesday. Yields rise as prices fall.

“One more person out of 15 now sees four hikes instead of three. For markets, that’s a big deal. For economists, maybe not,” said Mike Feroli, chief U.S. economist at JPMorgan Chase & Co.

Fed officials have upgraded considerably their economic outlook over the past year—first because of a synchronized upturn in global growth beginning last summer, and later after Congress approved stimulus in the form of tax cuts and increased federal spending.

Other changes in the Fed’s outlook Wednesday were relatively minor and paint an optimistic picture for the U.S. economy despite some recent risks from abroad, including trade tariffs, potential political turmoil in Europe and volatility in emerging-market economies.

“It’s a stay-the-course story,” said Roberto Perli, an analyst at research firm Cornerstone Macro. Because it is too soon to judge how much any of the international risks pose to U.S. growth, “they are right to take a wait-and-see approach here,” he said.

Most Fed officials expect the central bank will need to raise rates at least three more times next year and at least once more in 2020, leaving rates in a range between 3.25% and 3.5% by the end of 2020, the same end point officials projected in March.

“Officials seem more comfortable about both the consequences of past actions and their policy intentions,” said Mohamed El-Erian, chief economic adviser at Allianz SE, the German insurance giant.

The new interest-rate guidance shows the U.S. central bank sticking to a plan to raise short-term rates above a so-called neutral level that would neither stimulate nor slow the economy. It also suggests officials expect to reach that neutral level slightly sooner than before, most likely in about a year.

In a further reflection of the Fed’s changing policy footing, the postmeeting statement dropped language added four years ago that said officials expected to hold their benchmark rate “for some time” below neutral.

Officials modified their economic forecasts slightly, projecting modestly stronger growth and inflation this year and lower unemployment than they had in March. They didn’t change their view about the rates of growth, unemployment or inflation they expect over the long run, a sign they see most of the recent fiscal stimulus fading eventually.

Mr. Powell also said he expected temporary factors, such as a recent rise in oil prices, to push inflation above the Fed’s 2% target this summer, but he dismissed the development as a short-lived one that would have “little, if any, consequence for inflation over the next few years.”

Their estimate of the neutral fed-funds rate didn’t change compared with projections released in March. Nine of 14 officials put it at either 2.75% or 3%.

The increase announced Wednesday will leave the fed-funds rate around 1 percentage point below that neutral level. But because many officials expect they will need to raise rates above neutral to a level that would slow growth, they face difficult debates ahead over how much higher to lift rates, and at what pace.

The challenge for central bankers is to boost borrowing costs enough to prevent the economy from overheating, but not so much that it tips into recession. 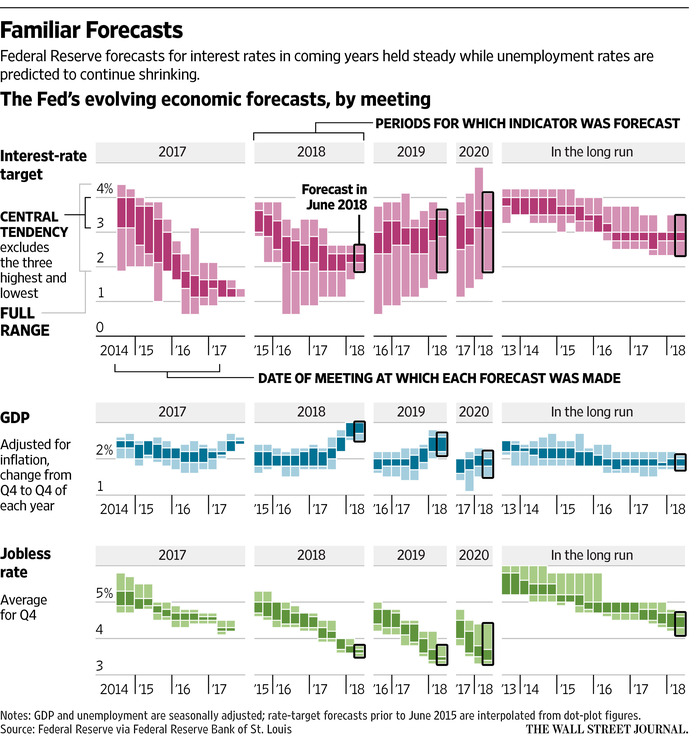 “As the economy has strengthened and as we’ve gradually raised interest rates, the question comes into view of, how much longer will you need to be accommodative and how will you know?” said Mr. Powell. “We’ll be guided by incoming data on the economy.”

These are very different tensions than the one the Fed faced in recent years, when it repeatedly delayed raising rates from near zero amid a fitful U.S. recovery and financial turbulence abroad.

“I would say I like the results so far,” said Mr. Powell. “We’ve been very, very careful not to tighten too quickly…We had a lot of encouragement to go much faster and I’m really glad we didn’t.“

“The data will tell them when they should get off that path,” said Mr. Gapen.

Mr. Powell also said next year he would convene a press conference after every policy meeting rather than every other meeting. Since beginning press conferences in 2011, the Fed fell into the pattern of making major policy changes only at meetings followed by a news conference.

The tactic helped the Fed leader communicate its policy changes in more detail than its postmeeting statement, but it lulled markets into thinking the central bank wouldn’t act between press conferences.

Some traders had viewed the change as hawkish because it would free the Fed to raise rates more frequently. But Mr. Powell said the change was purely to improve the Fed’s communications and shouldn’t send any signal about its policy intentions.

“That is just a communications story,” said Mr. Perli. “I don’t think the number of rate hikes changes because of that, but they have more flexibility in raising rates in May instead of June if they want to.”