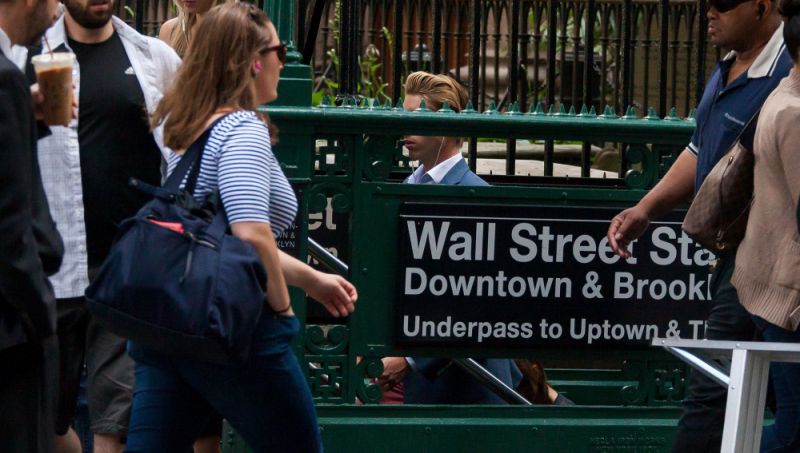 Mounting signs of a global economic slowdown hammered stocks and drove demand for sovereign bonds to such an extent that shorter-term yields rose above long rates in the U.S. for the first time since 2007.

The S&P 500 sank more than 1% as the inverted gap in rates for two- and 10-year Treasuries flashed the strongest recession warning yet. European shares plunged after Germany’s economy contracted in the second quarter, adding to angst fueled by weak Chinese retail and industrial numbers. Oil retreated, gold rallied and the dollar held steady.

The damage in American stocks was broad, with four stocks lower for every one that gained in the S&P 500. High-flying tech shares that paced yesterday’s rally amid easing trade tensions gave back all the advance. Banks led the drop as the inverted curve hits lending profits. Macy’s plunged to a nine-year low on weak results.

The British yield curve also inverted for the first time since the financial crisis and the pound edged higher after inflation unexpectedly rose. Government bonds rallied across Europe, with the yield on benchmark bunds sliding to another record.

The warning emanating from bond markets spooked investors already seeking shelter from the fraught geopolitical climate and the impact of the global trade war just a day after equities rallied on a tariff reprieve from President Donald Trump. While curve inversions normally precede economic downturns, they do not necessarily signal imminent doom.

“This is not a positive sign for the market,” Jonathan Golub, chief U.S. equity strategist at Credit Suisse, said on Bloomberg TV. “The Fed is totally empowered to change this dynamic and the market is saying they have to.”

Meanwhile, Hong Kong’s airport resumed normal operations after a chaotic night of protest in which demonstrators beat and detained two suspected infiltrators and Trump warned of Chinese troops massing on the border.

Here are the main moves in markets:

The yield on two-year Treasuries declined seven basis points to 1.60%.

June is LGBTQ+ Pride month. We're celebrating key moments in LGBTQ+ history in a new series called "60 Seconds of Pride." 60 seconds of Pride: LGBTQ fight for rights began with a secret society formed in 1950 What began as a moment that sparked the fight for LGBTQ+ equality in the 1960s became a movement […]

By RICARDO ALONSO-ZALDIVA WASHINGTON (AP) — Democrats are committed to passing legislation this year to curb prescription drug prices, but they’re still disagreeing on how to cut costs for patients and taxpayers while preserving profits that lure investors to back potentially promising treatments. It boils down to finding a balance: How big a stick should […]