US immigration agents can no longer separate immigrant parents and children caught crossing the border from Mexico illegally and must work to reunite those families that had been split up in custody, a federal judge has ruled.

The US district court judge Dana Sabraw in San Diego on Tuesday granted the American Civil Liberties Union (ACLU) a preliminary injunction in a lawsuit filed over family separations.

Sabraw ordered US border authorities to reunite separated families within 30 days, setting a deadline in a process that has so far yielded uncertainty about when children might again see their parents.

If children are younger than five, they must be reunified within 14 days.

The move – which came after the supreme court’s ruling upholding the travel ban targeting Muslim-majority countries – could open up a legal battle with the justice department which did not immediately respond to a request for a comment on the multistate lawsuit.

Sabraw, an appointee of President George W Bush, also issued a nationwide injunction on future family separations, unless the parent is deemed unfit or does not want to be with the child. His ruling requires the government provide phone contact between parents and their children within 10 days.

More than 2,300 migrant children were separated from their parents after the Trump administration began a zero-tolerance policy in early May, seeking to prosecute all adults who crossed the border illegally, including those travelling with children. 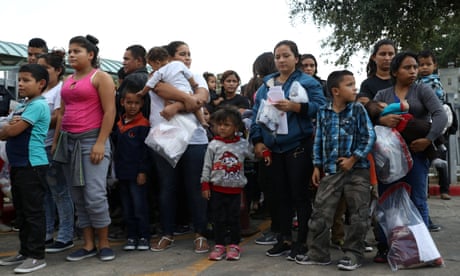 The ACLU had sued on behalf of a mother and her then six-year-old daughter, who were separated after arriving last November in the US to seek asylum and escape religious persecution in the Democratic Republic of Congo.

While they were reunited in March, the ACLU is pursuing class-action claims on behalf of other immigrants.

Meanwhile, the House of Representatives is set to vote on Wednesday on a immigration proposal designed as a compromise between moderate and conservative factions of the Republican caucus.

The bill would provide $25bn for a wall on the Mexican border. It would also limit legal immigration, provide a pathway to citizenship for Dreamers and end family separations.

“We’ve made it extremely clear we want to keep families together and we want to secure the border and enforce our laws,” the House speaker, Paul Ryan, said.

Donald Trump issued an executive order to end the family separations on 20 June, but the government has yet to reunite about 2,000 children with their parents. A Department of Homeland Security statement over the weekend on reuniting families seemed only to sow further confusion.

Before the preliminary injunction ruling, the government urged Sabraw not to rule that it stop separating and quickly reunite migrant families after they illegally cross the US-Mexico border, saying Trump’s executive order last week largelyaddressed those goals. But the judge disagreed. “The facts set forth before the court portray reactive governance responses to address a chaotic circumstance of the government’s own making,” Sabraw wrote. “They belie measured and ordered governance, which is central to the concept of due process enshrined in our constitution.”

“Tears will be flowing in detention centres across the country when the families learn they will be reunited,” said the ACLU attorney Lee Gelernt.

It is not clear how border authorities will meet the deadline. The health and human services secretary, Alex Azar, told Congress on Tuesday that his department still had custody of 2,047 children separated from their parents at the border. That is only six fewer children than the number in HHS custody from last Wednesday. Democratic senators said that was not nearly enough progress.

Azar refused to say how long it would take to reunite familiesadding that his department undertook extensive vetting of parents to make sure they were not child traffickers.

Also challenging will be the requirement the judge set on phone contact. At a Texas detention facility, immigrant advocates complained that parents got no answers from a freephone number provided by federal authorities to get information about their children.

Attorneys have spoken to about 200 immigrants at the Port Isabel detention facility near Los Fresnos, Texas, since last week, and only a few knew where their children were being held, said Simon Sandoval-Moshenberg of the Legal Aid Justice Center in Virginia.

“The US government never had any plan to reunite these families that were separated,” he said, and it was now “scrambling to undo this terrible thing that they have done”.

Many children in shelters in southern Texas have not had contact with their parents, though some have reported being allowed to speak with them in recent days, said Meghan Johnson Perez, the director of the children’s project for the South Texas Pro Bono Asylum Representation Project, which provides free legal services to minors.

“Things might be changing now. The agencies are trying to coordinate better,” she said. “But the kids we have been seeing have not been in contact with the parents. They don’t know where the parent is. They’re just distraught. Their urgent need is just trying to figure out, ‘Where is my parent?’”

The judges’ decision came as 17 states, including New York and California, sued the Trump administration on Tuesday to force it to reunite children and parents. The states, all led by Democratic attorneys general, joined Washington DC, in filing the lawsuit in federal court in Seattle, arguing that they are being forced to shoulder increased child welfare, education and social services costs.

In a speech before the conservative Criminal Justice Legal Foundation in Los Angeles, the attorney general, Jeff Sessions, defended the administration for taking a hardline stand on illegal immigration and said the voters elected Trump to do just that.

Outraged by the family separations, immigrant supporters have led protests in recent days in states including Florida and Texas. In Los Angeles, police arrested 25 demonstrators at a rally on Tuesday before Sessions’ address.

Outside the US attorney’s office, protesters carried signs reading, “Free the children!” and “Stop caging families.” Clergy members who blocked the street by forming a human chain were handcuffed by police and led away.

Later, protesters gathered outside the hotel where Sessions gave his speech. As his motorcade arrived, the crowd chanted, “Nazi, go home.”

5 Things To Know About the Delta Variant

A pandemic Olympics, without all the crowds: What gets lost?

At an extraordinary Olympics, acts of kindness abound

5 Things To Know About the Delta Variant

For the first time in more than a year, we’re feeling some hope—or at least cautious optimism—that the pandemic could […]